When I heard about the “Reel Infatuation” Blogathon by Font and Frock and Silver Screenings , I knew that I needed to join.  How can I resist writing about some of my favorite movie crushes? I’ll never turn down an opportunity to post some beefcake photos!  For my entry, I decided to write about one of my favorite teen idols, James Darren, aka “Moondoggie” from the first three Gidget films: Gidget (1959), Gidget Goes Hawaiian (1961) and Gidget Goes to Rome (1963).  He is so cute and for me, he makes the film–even though I also love Sandra Dee too.  For all intents and purposes, I am going to focus on his first Gidget film co-starring Sandra Dee.  But don’t think you won’t be treated later to an entry about Gidget Goes Hawaiian co-starring Darren with Deborah Walley as the spunky surfer girl.  I can’t help it, I love the 1950s/1960s teen beach movies.

Gidget is a coming of age story about 17-year old Frances “Gidget” Lawrence, portrayed by 50s/60s teen queen Sandra Dee.  The film takes place during Frances’ summer vacation between her junior and senior years of high school.  Her friends: Nan, Patti and Mary Lou are pressuring Frances to go with them on a “manhunt” to attract a boyfriend.  Apparently, if a girl hasn’t found a man before senior year of high school, she might as well become a nun.  The girls all go down to the beach and try to flaunt their stuff in front of the group of surfer boys, one of which is superhunk James Darren, aka Moondoggie.  Moondoggie is about 1-2 years older than Frances, he is starting college at the end of the summer.

The girls are trying too hard to attract the boys’ attention, except for Frances.  She’s a bit of a tomboy and ends up shunning the manhunt in favor of snorkeling.  Her friends think she’s hopeless.  Frances, in the first of multiple incidents, ends up getting tangled in some kelp.  Moondoggie sees her, grabs his surfboard, and fishes her out of the water.  From that moment on, we as the audience know that Moondoggie and Frances are going to end up together.  Moondoggie, though acting standoffish and too cool for school towards Frances, actually has a crush on her though he won’t admit it until the luau later in the film.

Moondoggie’s crush on Frances is obvious.  He is the one who nicknames her “Gidget.”  Gidget is a portmanteau of “girl” and “midget.”  Basing her nickname on “midget,” might not be seen as being very endearing, but this action shows that Moondoggie is accepting Gidget into the group.  Earlier in the film, while talking to the group leader, Kahuna, Moondoggie vents about Gidget’s presence in their group.  Kahuna, at least a decade older than the other boys in the group, knows that Moondoggie has a crush on Gidget and easily accepts her into the group and suggests that the others do the same.  Kahuna, I think, also doesn’t take the surf group as seriously as the other boys, and doesn’t really care if Gidget’s there.  He just wants to surf.

Moondoggie has fun teaching Gidget how to surf. As an aside, I love Gidget’s orange bathing suit.

Moondoggie’s infatuation with Gidget is also apparent when he sees Lover Boy (another boy in the surf group) giving Gidget surf lessons.  Lover Boy is getting very “handsy” with Gidget and it is very visibly making her uncomfortable.  It is obvious that Lover Boy has some other goals in mind besides teaching Gidget how to surf.  Moondoggie looks on at the lesson, and is very visibly irritated and jealous.  He intervenes when Lover Boy really gets carried away with the lesson.  Moondoggie not only wants to protect Gidget, he also doesn’t want other the other boys getting that up close and personal with her. He later takes Gidget surfing himself and gives her lessons on his board.  Moondoggie places his hands on her waist to help her stay up right on the board.

When Gidget gets tangled up in the kelp (again.  Come on Gidget!) and nearly drowns, Moondoggie saves her (again) and nurses her back to health in Kahuna’s tent.  As Nurse Moondoggie croons the movie’s theme song, “Gidget,” Gidget looks up at him adoringly and smiles.  She can’t keep her eyes off of him.  Moondoggie also smiles at her as he prepares a hot water bottle to warm her up.

“A regular tomboy, but dressed for a prom
Boy, how cute can one girl be?
Although she’s not king-size, her finger is ring-size
Gidget is the one for me…”

Later, Gidget finds out about the upcoming luau and convinces Kahuna to let her come.  It seems that the surfer boys think she’s too innocent to attend their annual shindig.  Gidget has an ulterior motive for attending the luau: she wants to get together with Moondoggie.  Because Gidget is awkward and can’t just tell Moondoggie, she puts together a scheme to make Moondoggie jealous.  She’s going to attend the luau with another one of the surfer boys and pay him to act friendly with her within sight of Moondoggie.  However, her plans are messed up when the surfer boy she hired ends up bailing and giving the job to Moondoggie!

Gidget makes cow eyes at Moondoggie as he sings to her.

Moondoggie shows up to earn his money and also out of amusement after being told of Gidget’s scheme.  Now instead of doing the smart thing and admitting to Moondoggie that he was the boy she wanted to make jealous, Gidget pretends that she’s in love with Kahuna, despite him being twice her age.  Gidget has Moondoggie hold her tight while they sway to the music.  Entranced and in love, Gidget is soaking up every moment in Moondoggie’s arms.  One can’t help but notice that Moondoggie has the same facial expression as Gidget.  Both are holding each other, swaying to the music, eyes closed.

Moondoggie then brings out the big guns and serenades Gidget with “The Next Best Thing to Love.”  As Moondoggie sings, Gidget looks at him with big cow eyes.  Moondoggie is holding Gidget close and is just as smitten with her as she is with him.  He goes in for the big kiss and Gidget accepts it willingly… because, duh! Then of course, one of the surfers has to come over to remind Moondoggie that its past midnight and he no longer has to pretend with Gidget anymore.  Embarrassed, Gidget runs off.

Seeing that Gidget is leaving, Kahuna approaches Gidget for a ride to a friend’s beach shack.  Wanting to keep up the facade that she’s in love with Kahuna, Gidget agrees to give him a ride home and follows him into the beach shack for “one of his private parties.”  It is apparent that Gidget is hoping to get together with Kahuna, intimately.  Kahuna plays along and almost falls under her spell until he comes to his senses and tells her to go home.  Moondoggie, not trusting Kahuna and wanting to protect Gidget, shows up at the beach shack and has it out with Kahuna.

Gidget’s dad plays matchmaker and inadvertently sets his daughter up on a blind date with Moondoggie, despite warning her to “never again go near those beach hoodlums.”  Don’t look so upset Gidget! He’s gorgeous! Your dad could have done a lot worse!

Gidget ends up being picked up by the police when her car breaks down.  She’s picked up by her parents and is grounded for the rest of the summer.  Had she just told Moondoggie about her scheme to make him jealous, she could have just avoided the whole Kahuna/beach shack debacle.  Fortunately for Gidget, the young man whom her father has been trying to fix her up with throughout the entire film turns out to be Moondoggie! Of course, to Gidget’s parents, he’s Jeffrey Matthews, the son of one of Gidget’s dad’s colleagues.

“Just remember, [Gidget] might be pint-sized, but she’s quite a woman.”

GIDGET: “Oh boy, would I? Just wait until the girls get a load of this! Honest to goodness, it’s the absolute ultimate!” 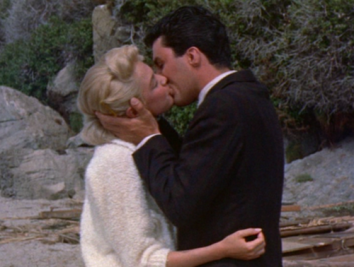 The Gidg has got her man!

I don’t blame Gidget for being such a nerd when Moondoggie “pins” her.  This is the ultimate symbol of “going steady.”  Moondoggie has essentially asked Gidget to be his girlfriend and she wholeheartedly accepts.  Her friends, the ones who were flaunting themselves trying to attract a boyfriend, are still single at the end of the film.  Gidget, who didn’t try hard at all, and was just herself, has managed to not only snag a boyfriend, but a super hot one to boot! You go girl. 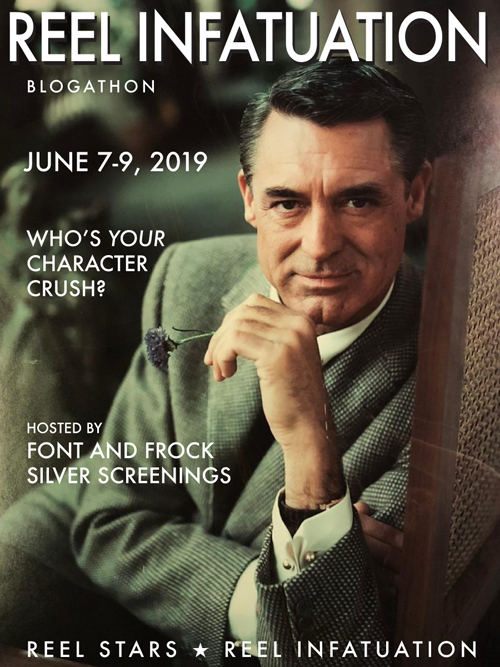