In today’s world, especially during the midst of a once in a century event (e.g. a global pandemic), laughter can be just the cure. A good comedy allows one to disappear into the world presented by the film. For the duration of the film, the viewer can forget about his or her troubles. In the film’s world, the viewer’s tax problems, health issues, financial struggles, relationship woes, etc. do not exist. A good comedy will endure, continue to entertain and remain funny, no matter how many times it has been seen by the viewer. One comedy that fits this bill is My Man Godfrey. I have seen this film at least a dozen times and it never fails to make me laugh.

My Man Godfrey tells the story of the wealthy Bullock family, prominent figures of the New York social set. This family is completely insane. At the beginning of the film, we meet the grown Bullock daughters, Cornelia (Gail Patrick) and Irene (Carole Lombard). Cornelia and Irene are taking part in a scavenger hunt, an event put on to entertain the rich for the evening. This scavenger hunt requires the participant to locate all the items on the list and return them to headquarters. Each wealthy family makes up one team and the members of the team work together to locate each object on the list. Cornelia and Irene are in search of a “forgotten man” (i.e. homeless, destitute man). They come across Godfrey (William Powell).

Cornelia instantly makes an enemy of Godfrey when she offers him $5, making it seem like she’s doing Godfrey a favor. When she informs him that it is part of a scavenger hunt, he is irritated and Cornelia ends up in an ash pile. Irene, on the other hand endears herself to Godfrey when she reveals herself to be of a much kinder temperament to Cornelia. Enchanted by Irene and wanting to help her beat the snobbish Cornelia, Godfrey agrees to return to the scavenger hunt’s headquarters as Irene’s forgotten man. With Godfrey’s help, Irene wins the scavenger hunt.

Godfrey gives an amazing speech at the scavenger hunt headquarters. He chastises the rich for using the less fortunate as a form of entertainment, and does not mince words. After making his contempt for the rich folks’ activities clear, Godfrey leaves in a huff. Feeling bad for upsetting Godfrey, Irene chases after him and offers him a job as her protégé and family butler. Godfrey accepts the position. The next day, Godfrey arrives for his first day of work and quickly learns what he has gotten himself into.

The Bullock family is bonkers. The matriarch of the family, Angelica (Alice Brady), has her own protégé, Carlo (Mischa Auer). Carlo is supposedly a musician, however we never hear him play more than one part of one song. Alexander (Eugene Pallette), the patriarch of the Bullock clan, is exasperated by Carlo, whom he sees as a mooch and drain on the family’s finances. There is a hilarious scene where a fed up Alexander asks Carlo to accompany him. We then hear glass breaking. Alexander returns and states that Carlo “had to leave very suddenly.” Alexander is the straight-man to the family’s antics, but even he has his moments of insanity. Cornelia is a snob and very much resents Godfrey’s presence in the family’s home. She does not hide her contempt for him. Irene however, is in love with Godfrey and does not hide her feelings for him whatsoever. Finally, Molly (Jean Dixon), the wise-cracking maid is Godfrey’s experienced counterpart whose sassiness is perfect for showing Godfrey “the ropes” of handling the various temperaments of the members of the Bullock family.

One particularly funny moment in the film has Irene hosting a party for her friends while experiencing a moment of depression after being rebuffed by Godfrey. She walks around the party in a dramatic moment saying things like: “life is but an empty bubble,” and “what is food?” Carole Lombard’s Irene is the key to the film’s comedy. She is so hilariously wacky, but at the core is just a sweet young woman who wants someone she can love. Godfrey is that person with whom Irene is completely smitten. However, the trick is to win over Godfrey. William Powell’s portrayal of Godfrey brings a steady, calming influence to the film. Without the straight-man Godfrey character, this film would be completely off the rails and would probably be really irritating. Godfrey’s looks of exasperation and sheer surprise make him a very funny character in his own right.

I love this movie. Irene, Godfrey and Angelica make me laugh and never fail to make me feel better. My Man Godfrey is one of my all-time favorite screwball comedies. This movie is a riot with each scene funnier than the last. I can imagine myself living in the Great Depression, scraping up some change to see this film in the theater. I can imagine myself laughing hysterically at this film and feeling better because I was able to forget about standing in the breadlines for just a few minutes. This is the power that movies have–escapism. A film that can whisk the viewer away and capture their imagination is a film that will endure for generations. My Man Godfrey is one such film that has endured for 85 years and will continue to last because it is hilarious. It never fails to make me feel better through its power to make me laugh.

Some of my favorite quotes from the film:

GODFREY: My purpose in coming here tonight was two-fold: firstly, I wanted to aid this young lady. Secondly, I was curious to see how a bunch of empty-headed nitwits conducted themselves. My curiosity is satisfied. I assure you it’ll be a pleasure to go back to a society of really important people.

GODFREY: These flowers just came for you, miss. Where shall I put them?

IRENE: What difference does it make where one puts flowers when one’s heart is breaking?

GODFREY: Yes, miss. Shall I put them on the piano?

ANGELICA (to ALEXANDER): Please don’t say anything more about it! You’re upsetting Carlo!

Carlo reacting to Alexander’s rant about money and Angelica trying to protect her mooching protégé.

IRENE: What is food?

Irene is dramatically moping around the house and trying to sound philosophical.

For my blogathon entry, I am covering Carole Lombard’s friendship with Lucille Ball.

January 16, 2017 is the 75th anniversary of the death of comedienne Carole Lombard.  In 1942, Lombard, along with her mother, husband Clark Gable’s press agent, and fifteen army servicemen were killed when their plane crashed into the mountains in Nevada.  Lombard, et. al. were on their way back from a war bond rally in Lombard’s home state of Indiana.  It has been said that the group was supposed to travel back to Los Angeles via train, but Lombard was anxious to return home and wanted to fly.  Her mother and Gable’s press agent did not want to fly, but agreed to flip a coin with Lombard.  Lombard “won.”  After her death, Clark Gable was inconsolable and was seen racing around his San Fernando neighborhood on his motorcycle.  Friends were concerned that he was suicidal. Two such friends were Lucille Ball and husband Desi Arnaz.

Ball and Lombard were friends from RKO Studios.  They were neighbors in the San Fernando Valley.  When Ball and Arnaz married in November of 1940, Lombard and Gable (who married the year prior) threw them a party at the Chasen’s nightclub in Hollywood. Many of Ball and Arnaz’ friends predicted instant doom for their union, but not Lombard and Gable.  Lombard and Gable frequently invited Ball and Arnaz to spend the day with them at their ranch.  After Lombard’s death, Gable (after tearing around on his motorcycle) would stop at Ball and Arnaz’ doorstep just to talk about his beloved wife Carole.  He would also occasionally bring over one of her films for the three of them to watch.  In her book, Love Lucy, Ball notes that she was never sure whether Gable was trying to torture himself by watching his late wife’s films, or whether seeing and hearing her brought him a sense of comfort (Ball, p. 123).  However, Ball and Arnaz were there for Clark and consoled him and entertained him when he needed it. 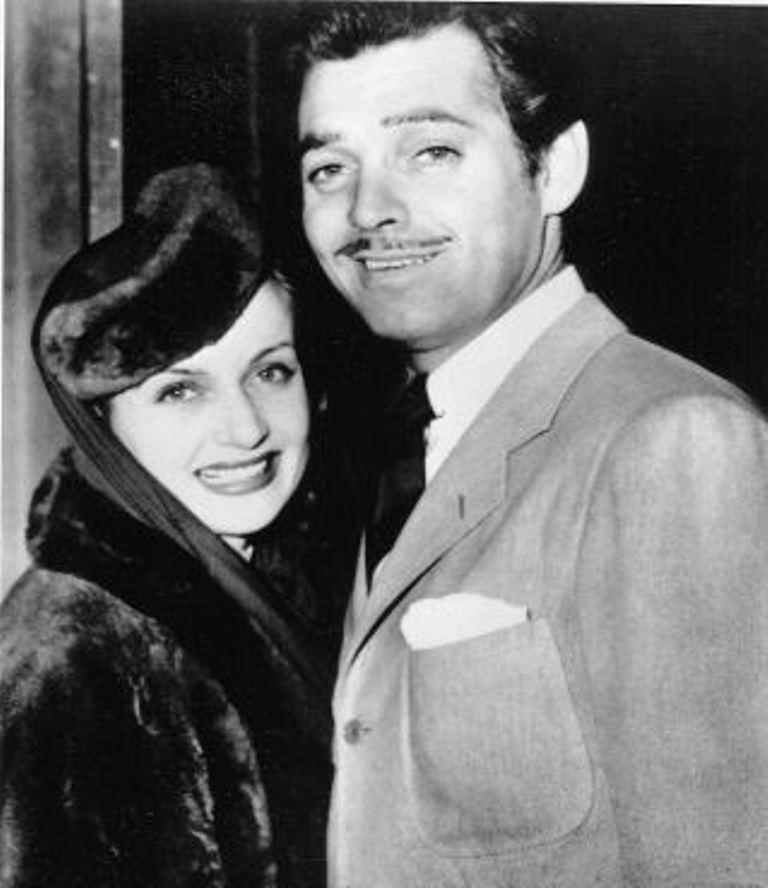 By 1951, Ball’s career in the movies was waning and Arnaz’ never really started (because of his accent, studios claimed he was difficult to cast).  They had an opportunity to star in their own series in the fledgling industry of television. Ball was currently appearing on CBS’ radio show, My Favorite Husband, and the network wanted to move the program to the small screen.  At the time, “movie people” frowned on television as it seemed like a novelty and beneath them somehow.  It took some time to lure big screen stars to the small screen.  Ball and Arnaz (who at this time was a successful bandleader with The Desi Arnaz Orchestra that toured the country frequently) had to make a decision.  One night, Ball had a dream where friend Carole Lombard appeared and she said (to Lucy) “take a chance honey, give it a whirl.” This was all the confidence Lucy needed and I Love Lucy was born and television history was made.

TRIVIA: Lucy had a superstition about the combination of the letters AR–a combo which is present in both Lombard’s first and last name.  Lucy believed she hadn’t hit it big until she married Desi ARnaz.  When I Love Lucy filmed their pilot, Lucy and Desi’s characters were Lucy and Larry Lopez.  Aside from the fact that those names sound corny, Lucy wanted the characters renamed to incorporate “AR.”  Lucy and Larry Lopez became Lucy and Ricky RicARdo.  Later in her subsequent sitcoms, Lucy appeared as: Lucy CARmichael (The Lucy Show); Lucy CARter (Here’s Lucy) and Lucy BARker (Life With Lucy).