I’ll admit that Busby Berkeley isn’t one of my favorite figures from the classic era of Hollywood.  While I recognize that his choreography is unique and very creative, sometimes I find it a little tedious when there is a lot of it present in one film.  Some of the kaleidoscope numbers seem to just go on and on.  However, in the terms of the modern movie musical, Berkeley is a pioneer.  Not only for uniting song and visuals together, but also for his technical work when bringing the musical number to life on screen.  As a choreographer,  Berkeley didn’t just merely have the chorus girls tap out a syncopated beat and move left to right within the constraints of the stage.  Berkeley had elaborate soundstages built to showcase his numbers.  Other routines he created featured large winding staircases, large sets of risers to feature multiple layers of dancers, enormous fountains and more.  Berkeley’s set pieces not only made use of the stage itself but all the vertical space above.  The dance numbers are always over the top and very much in rhythm.  Berkeley’s heyday was in the early 1930s, before the production code was enforced (this era is also known as “pre-code”).  Many of Berkeley’s dance numbers can also feature some racy elements that many people may find surprising for an eighty-plus year old film.

One of Berkeley’s raciest pre-code films is undoubtedly 1933’s The Gold Diggers of 1933 and despite what I said about not being a huge fan of Berkeley, I love this film.  Starring the usual Berkeley pre-code musical suspects: Dick Powell, Ruby Keeler, Ginger Rogers, Ned Sparks, and Joan Blondell, The Gold Diggers of 1933 features Powell as a songwriter who is hired to write the music for girlfriend Keeler’s new show.  The opening number, “We’re in the Money” performed by Rogers, is pretty racy for a 1933 film as the girls appear to only be clad in a coin cape and bra with a large coin serving as a pair of panties.  Rogers’ large coin is ripped off her after the number when the costumes and set pieces are repossessed.  Despite the scantily clad dancers in this number, this is hardly the raciest production in the film–that honor goes to “Pettin’ in the Park.”

Ruby Keeler and Dick Powell are “pettin’ in the park.”

“Pettin’ in the Park” features Dick Powell and Ruby Keeler “on a date” with Powell reading an excerpt from the book, Advice to Those in Love.  The main crux of the advice is that spending time outside with your partner is a sure-fire way to get them “in the mood.” Powell starts crooning a catchy tune while Keeler clomps around on stage (I don’t think she’s a good dancer, definitely not graceful).  The song Powell is singing is a little ditty entitled, you guessed it, “Pettin in the Park.” Keeler joins in on some of the verses. It features immortal lyrics like this:

Suddenly a box of animal crackers (that Keeler had on her person for whatever reason) transforms into a zoo with a park scene.  There are dozens of couples on screen “petting” one another.

Then, this is where the musical number gets bizarre.  Powell starts really taking the petting advice from his self-help book to heart, and he gets a little too “handsy” for Keeler’s taste in the back of a car.  She bails on him, on a pair of roller skates no less, and heads home.  Suddenly a whole line of roller skating policemen emerge, along with a “baby” played by Billy Barty.  He is wearing a big bonnet and sitting in a baby carriage. He then rolls through the scene while shooting spitballs.  Barty is absurd, because it’s obvious he’s not a baby–but rather a little kid (Barty was born a dwarf.  His full adult height was 3’9).  The cops then go after the baby.  They try to grab him, he ducks and they roll past him and away.

Next, we’re treated to a scene of this park as it progresses throughout all the seasons.  We first see the chorus girls sporting winter fashions while they brave a snowstorm.  Then the scene progresses into the spring and summer.  We see all the petting couples lying on benches.  The women are wearing flimsy white dresses.  Everyone’s in blissful “Pettin’ in the Park” glee, until oops, it’s fall now.  A rainstorm breaks out and the women run for cover, hiding behind a series of dressing rooms located behind one large curtain–it looks like separate rooms though.

The women remain in silhouette as they remove their wet clothing and get into something more comfortable.  This is probably one of the most risque scenes that has ever appeared in a pre-code film.  It is obvious that most of the women are topless or maybe even nude, as they change into something more comfortable.  Lecherous baby Billy Barty is back, this time sporting rain gear.  With a mischievous grin and shifty eyes, he raises the curtain.   The ladies’ bare legs slowly come into view and they are now sporting sexy new outfits.  Except the outfits are not sexy at all.  All the ladies emerge from the curtain wearing metal clothing.  Almost a literal chastity belt, if you will– the perfect outfit for any “pure” woman. 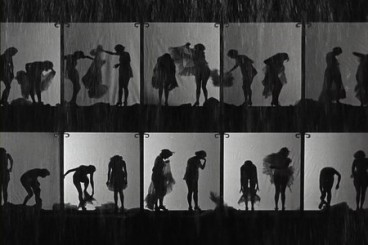 One of the raciest scenes in pre-code

The men are understandably a little disappointed and perhaps are in a little bit of pain, physically.  We’re back to Powell and Keeler, who is also now sporting metal clothing.  Billy Barty is to the rescue however, as he hands Powell a can opener.  The number ends with a suggestive shot of Powell cutting Keeler’s “dress” with the can opener.

This number would never be accepted today.  With today’s intense focus on sexual harassment, consent, and women’s roles in society, this number would have probably spawned numerous boycotts, social media diatribes, statements from the filmmakers expressing regret for having ever conceived of the number, hashtags, and everything else that could be done to express rage or apologize.  It is important to look at this number from a 1933 perspective, however.  It is a perception that people used to be a lot more prim and proper “back in the day,” or at least until the Sexual Revolution of the 1960s and subsequent Women’s Rights movement in the 1970s.  However, it is obvious that even in 1933, the ideas about sexual roles were around even then–men are the pursuer and the women are the ones being pursued.  Sex was also on the forefront of almost any romantic couple’s minds.  Were the couples that were “pettin’ in the park” married? Probably not.  Powell and Keeler’s characters were not, yet off goes the chastity belt (though they marry by the end of the film).  One of the great things about “Pettin’ in the Park” is that the film is so delightfully indiscreet when it’s putting on the guise of being discreet–the perfect quality in any pre-code film, in my opinion.