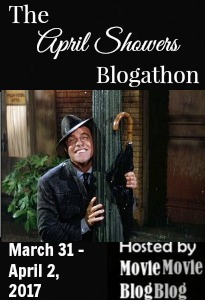 Rain in movies is often used to evoke feelings of depression, despair, unhappiness, etc.  Film noir often uses rain to set the mood of the film.  In Key Largo (1948), the constant rain storm keeps the action contained onto the ship and gives the film a claustrophobic feeling.  While, noir and other more serious types of films tend to use rain as a way to make the scene dreary, scary, what not, other genres of film use rain for other purposes.  Romantic films like The Notebook (2004) and Breakfast at Tiffany’s (1961) use rain to create romantic kissing scenes.  Often times, in romantic films, the characters will be somewhat on the outs, only to realize their love for one another during a horrific rainstorm.  Their romantic feelings for one another will culminate with a passionate clinch and kiss in the pouring down rainstorm.  Other films, such as Pleasantville (1998) and Beauty and the Beast (1992) may use rain to symbolize change.  It is the idea of change that is represented so beautifully in Singin’ in the Rain (1952).  Gene Kelly in an iconic scene, memorably dances down the street in the pouring down rain.

And so starts one of the most memorable rain scenes in film.

Singin’ in the Rain is quite simply one of the best (if not the best) musicals ever made.  It tells the story of Hollywood’s transition from silent films to “talkies.”  Stars Don Lockwood (Gene Kelly) and Lina Lamont (Jean Hagen) are great romantic stars and are also involved in an off-screen romance–at least according to Monumental Pictures’ publicity department.  In reality, Don cannot stand Lina.  She on the other hand, cannot allow her ego to believe that someone doesn’t love her.  Cosmo Brown (Donald O’Connor) is in charge of the studio’s music department and is also Don’s best friend.  Don ends up involved with an aspiring actress, Kathy Selden (Debbie Reynolds) who Lina is intensely jealous of.  Not only is Don in love with Kathy and not Lina, but Kathy also threatens Lina’s career.  Kathy can sing and dance–two things Lina can’t do.  After the hilarious failure of Monumental Pictures’ first talkie, Cosmo, Kathy and Don come up with the idea to turn their turkey of a movie into a musical.  After dropping his love Kathy off at home and excited about their new venture, Don is on Cloud Nine.  Not even a torrential downpour can dampen (pun intended) his spirits.

Kelly’s “Singin’ in the Rain” number is simply put, one of the greatest things to ever grace the silver screen.  His excitement over his new romance and the new direction his career is heading is infectious.  Even though he starts out carrying his umbrella, he quickly puts it away.  Kelly’s character Don, is so happy about his life that he doesn’t even care that he’ll be soaked on the way home.  He gleefully taps and skips his way down the sidewalks with a big smile on his face.  Don sees a lamp post, jumps up and twirls around.  He pretends his umbrella is a guitar, and playfully tips his hat to the woman in the store window advertisement.  He taps into his inner child, without a worry in the world during his magical walk down the street.  Don throws and catches his umbrella and allows water from the downspout dump on his head.  He pretends to balance on a curb.  Don’s rain dance culminates with him splashing around in the massive puddles.  A cop finally ends the number when he stops and stares at this guy essentially playing in the road.  Don unconcerned, croons “I’m singin’ and dancin’ in the rain” and walks down the sidewalk, arms still swinging happily.  His glee and enthusiasm is contagious.  It is impossible to not feel happier after seeing this scene.  In a way, the rain represents a new life.  It washes away all the unhappiness and annoyances of his previous life and now he can start anew, with his new film persona and lady love.

The song “Singin’ in the Rain” was not written for Singin’ in the Rain.  In fact, all the songs in the film, except “Make ‘Em Laugh” (which sounds exactly like Cole Porter’s “Be a Clown”) were used in past musicals.  “Singin’ in the Rain” was crooned by Cliff Edwards in the 1929 musical, The Hollywood Revue of 1929.  Judy Garland gives a rousing rendition of the song in the 1940 musical, Little Nellie Kelly.  In 1971’s A Clockwork Orange, the song was used in a more disturbing fashion.  Star Malcolm McDowell hums the iconic song while raping a woman.  Gene Kelly’s rendition of the song plays over the closing credits.  Kelly himself was not pleased to be associated with this film. In 2007, Usher re-created the famous musical number in an homage to Kelly’s famous number, complete with the same style suit and everything.

Even though “Singin in the Rain” was more than 20 years old by the time it was used as the title song for the 1952 classic and had been performed multiple times by different artists, even by big star Judy Garland, it is Gene Kelly’s rendition that is the most famous.  The image of Gene Kelly twirling on the lamp post while ‘singin’ in the rain’ will forever be a part of American pop culture.  In an era where the word “iconic” is thrown around too often and too loosely to the point where it doesn’t really mean much, the image of Gene Kelly singing and dancing in the rain truly meets the definition.  The song itself has such a catchy tune, it’d be hard to find someone who at least doesn’t know the main part of the chorus.  Even Cary Grant was humming it in the shower in North By Northwest.