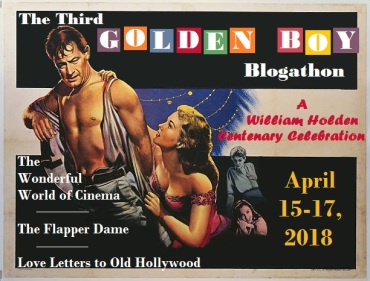 William Holden was born 100 years ago today.  He made his film debut in Golden Boy (1939) co-starring Barbara Stanwyck.  Holden was only 21 when he was cast in his first film and it was apparent to everyone that he was inexperienced.  Holden was almost fired from his first part; but veteran film star Stanwyck took him under her wing and coached and encouraged him, often on her own time.  Under Stanwyck’s tutelage, Holden was able to keep his job and turned in a serviceable performance.  After the filming on Golden Boy ended, Holden and Stanwyck remained lifelong friends.

In 1978, the two friends appeared together as presenters at the annual Academy Awards ceremony.  Holden deviated from reading the list of nominees to publicly thank Stanwyck for her helping and supporting his career when he was first starting out.  Four years later, Stanwyck appeared at the Academy Awards to accept an Honorary Oscar.  Holden had passed away a few months prior.  After her very genuine and humble speech, Stanwyck paid tribute to her friend stating: “I loved him very much and I miss him.  He always wished I would get an Oscar.  And so tonight, my golden boy, you got your wish.”  It was a very sweet and emotional tribute.  I highly recommend looking up both Holden’s tribute to Stanwyck and Stanwyck’s tribute to Holden on You Tube.

Whether or not Holden would have still become a star without Stanwyck’s help, it is unknown, but being fired from his first big part could have definitely curtailed his career.  Stanwyck should definitely be given credit for being kind and generous and helping out a young man who wanted a film career.  She could have been a diva and demanded a more experienced co-star (and could have probably gotten one), but she saw something in her young 21 year old co-star and opted to provide her knowledge and advice instead.  For the next eleven or so years after Golden Boy, Holden continued in small parts and small films and continued to grow his skills and gain experience.  During this period, Holden appeared in many B-list films including one with RKO’s former “Queen of the Bs,” Lucille Ball.

In 1949, Holden and Ball appeared in the comedy, Miss Grant Takes Richmond.  Ball had just been signed to Columbia Pictures after a recommendation from Buster Keaton to Columbia studio-head, the irascible Harry Cohn.  Keaton suggested to Cohn that Ball would be perfect for comedic parts.  Miss Grant Takes Richmond was the first film Ball made under her new contract.  This film is mainly a vehicle for Ball and her physical comedy talents, but Holden provides excellent support as her straight-man.  His worldly, but weary, everyday man persona had emerged by this time and also provides Ball with a handsome and worthy love interest.  Reliable character actors, James Gleason and Frank McHugh, provide excellent support.

In Miss Grant Takes Richmond, Ball plays Ellen Grant, an aspiring secretary.  She attends secretary school and is the worst student in the class.  She can’t type, has to make constant corrections, pulls the ribbon out of the typewriter and manages to get ink everywhere.  She seems hopeless as a secretary–a sentiment echoed by her aunt and uncle and fiance who cannot understand why she’d want a career when she could just get married and be a housewife.  One day at the secretary school, Dick Richmond (Holden), comes in looking for a secretary for his real estate office.  Much to everyone’s surprise, including Ellen’s, Dick selects her.

At the office, it seems that there is more going on between Dick and his associates, Gleason (James Gleason) and Kilcoyne (Frank McHugh).  Ellen constantly takes calls from people seemingly wanting to put down-payments down on various properties in various neighborhoods.  In reality, Dick and his cronies are actually running a bookmaking operation.  The calls and payments that Ellen is accepting are actually bets being placed on horses at various racetracks.  The real estate office and Ellen are just a front to fool authorities.  To keep up the charade, Dick mentions that there is some land available for a housing development, but the owner wants $60,000.  He mentions that this is too expensive, but he’d be willing to pay $55,000.  Without his knowledge, Ellen goes down to the owners of the property and manages to negotiate the price down to $50,000.

Ellen, her fiance (who is also a District Attorney), and the owner of the property all go down to Dick’s real estate office to let him know of the deal to purchase the land.  Ellen explains that Dick’s office will now be able to build a housing development of affordable housing.  Dick knows that this deal will cause financial trouble for his operation, but has to play along.  He then decides to try and scare Ellen away from the organization by being aggressively romantic with her, but that backfires when he finds out that he’s fallen for her.

Dick’s ex-girlfriend, Peggy Donato comes to visit her old flame and to also place a large bet ($50,000) on a race.  Ellen accepts the bet, not knowing that a) Donato is placing a bet on a horse race and b) That the race that Donato is betting on is fixed, in her favor.  Dick cannot afford to pay $50,000 to Donato.  Dick tries to explain his predicament to Donato who is not sympathetic in the slightest.  Donato, who still has feelings for Dick, tells him that he can either run away with her or she’ll have her goons take care of him.

Back at the housing development, Dick has put Ellen in charge.  He has also embezzled funds from the down-payments he received for the houses in the development.  There is a funny scene at the construction site where Ellen and the female customers decide to adjust the foundation outlines (by moving the ropes) of their respective homes.  When they’re done, the size of the rooms are wildly out of proportion.  The construction crews start pouring the cement foundations, per the rope guidelines and soon realize something is horribly wrong.  There is a funny scene where the foreman rants about the crazy foundations.  People’s homes are overlapping, some rooms are enormous while others are tiny, there are random triangular shaped rooms that are too small to use, you name it, it’s a problem.  However, the project now has a larger problem, it’s out of money.

Dick, feeling guilty about scamming innocent people and Ellen, decides to run off with Donato and pay all his customers back.  Ellen finally figures out that the whole operation was a scam and that Dick took the money from the housing development.  She is upset, but decides that she still cares about her former employer and opts to scheme to get rid of Donato.  In a scene reminiscent of the 1957 I Love Lucy episode, “Lucy Wants to Move to the Country,” Ellen decides to dress up like a gangster and pass herself off as the real brains of the bookmaking operation.  She cobbles together her own “gang” and tries to intimidate Donato’s gang.  That plan backfires when Donato’s gang proves to be too strong.  At that time, Gleason and Kilcoyne show up with $50,000 that they won in a bet placed with Donato’s operation–which can be repaid to the people who purchased the homes at the development (or can be used to actually complete the homes).

This is a fun film that shows off both Ball and Holden’s strengths.  Two years later, Ball would be starring in her groundbreaking sitcom I Love Lucy.  In 1954, five years after their film together, Holden would be reunited with Ball when he made an appearance as himself on her show.  “L.A. at Last!” was the first episode of the Hollywood story arc of I Love Lucy.  Holden has his first encounter with the star-struck Lucy at the fabled Brown Derby restaurant in Hollywood.  Later, he meets Lucy again in the Ricardos’ hotel room where she attempts to disguise her appearance with a putty nose.  My favorite thing about Holden’s entire appearance is the fact that this sets up the idea that Holden is a gossip.  There are multiple episodes featuring other celebrities where the celebrity alludes to Holden giving them the low down on Lucy.

By the time Holden makes his appearance on I Love Lucy, his star had risen exponentially since Miss Grant Takes Richmond, much like Ball’s had.  In 1950, a year after ‘Richmond,’ Holden got the plum role of Joe Gillis in Sunset Blvd.  This film catapulted Holden into stardom.  He received an Oscar nomination for his part as the weary and cynical screenwriter who allows himself to be a “kept man” by the delusional and absurd former silent screen star, Norma Desmond (Gloria Swanson).  After Sunset Blvd., Holden appeared in a string of hits: Born Yesterday (1950), Stalag 17 (1953), The Moon is Blue (1953), Executive Suite (1954), Sabrina (1954), The Bridges at Toko-Ri (1954), The Country Girl (1954), Picnic (1955), Love is a Many Splendored Thing (1955), and The Bridge on the River Kwai (1955).  Holden took home the 1953 Best Actor Oscar for Stalag 17.  Holden’s string of hit films during just this five year period is remarkable and a feat which is rarely repeated. 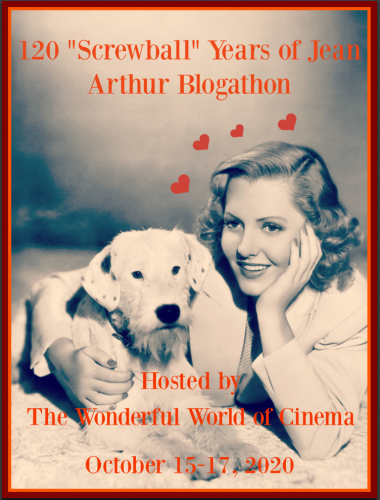