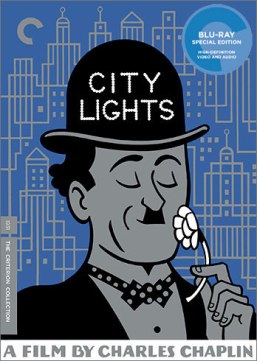 I’ll admit that silent movies are not among my favorite genre of film.  Recognizing that many of my favorite Golden Era performers came from the world of silent film, I try to watch some of their silent films, hoping that maybe I’ll find one that I like.  Honestly, I feel like many of the silent films I try to watch are too over the top and I find that the dramatics detract from whatever the storyline is.  I find myself getting bored and doing other things, or simply turning the film off because nothing “clicks” for me. Along with horror and science fiction (unless it’s of the cheesy B-movie variety), silent is among my bottom three favorite film genres.

However, with the recent TCM spotlight on Slapstick Comedy, I ended up catching The Circus (1928) with Charlie Chaplin.  Even though it was silent, Chaplin’s brand of storytelling, combined with his physical comedy made the film mesmerizing.  I ended up watching the subsequent silent film presented that evening–Steamboat Bill, Jr. (1928) with Buster Keaton and being equally enthralled.  Perhaps Chaplin and Keaton will serve as a positive introduction to silent film.

Prior to TCM’s spotlight, I had recorded three Charlie Chaplin films: The Kid (1921); The Gold Rush (1925); and City Lights (1931).  I recorded these films because: 1) Charlie Chaplin is a legend and I wanted to see his work; and 2) I wanted to give silent film another chance.  I don’t want to immediately discount hundreds of films because they’re part of a genre that isn’t my favorite.  With every film I watch, I go into it wanting it to become my next favorite film.  While nothing will ever usurp The Long Long Trailer (my favorite film), I’ve found numerous films over the years that rank among my favorites.  Surprisingly enough, one Charlie Chaplin film has now made it to my list of favorites–City Lights.

City Lights was released in 1931.  It was Chaplin’s first film made since the advent of
“talkies.” He was somewhat daring when he wrote, produced, directed and starred in this film.  And because he wasn’t busy enough, he also helped compose the score of this film as well.  While other studios were producing sound films, Chaplin stuck with silent.  He spent two years (1928-1930) working on City Lights.

City Lights has a very simple story: The Little Tramp falls in love with a blind Flower Girl and she falls in love with him, thinking he’s a millionaire.  The Little Tramp learns that she and her grandmother are facing eviction because they cannot come up with the $22 worth of back rent. He makes it his mission to raise the money to save his love’s home.  Among the many tactics he tries: a fixed boxing match, taking a job as a street sweeper, borrowing money from his millionaire “friend” (who only recognizes The Little Tramp when he’s inebriated) and finally in desperation, theft.

My favorite parts of the film however, dealt with The Little Tramp and the blind Flower
Girl.  Their scenes together are so adorable.  The Little Tramp very much loves this girl and wants to do anything he can to help her.  He goes through great lengths to try and not only save the Flower Girl and her grandmother’s home, but he also wants to do something to improve the Flower Girl’s life–he wants nothing more than for her to be able to see.  The ending of the film, where The Little Tramp and the Flower Girl are reunited after months of not seeing each other is probably one of the best film endings of all time–and one of the most romantic.  I won’t spoil the ending, but it’s so simple and so sweet. 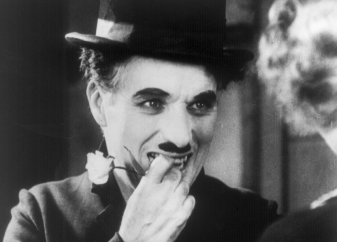 In City Lights, Chaplin’s fifth full-length film, he continues to demonstrate his ability to mix physical comedy (e.g. the boxing match and the scenes with the Millionaire) with the romantic (e.g. the beginning and ending scenes with the Flower Girl) and even at times, the sad (e.g. the scene where The Little Tramp goes to jail) is just one of the reasons he was such a legend and genius in film-making.  Straight slapstick shtick often gets tiring (e.g. The Three Stooges).  Chaplin manages to not only make The Little Tramp sympathetic, but he makes him funny.  The Little Tramp is a well-meaning, sweet man who just wants love.  He’s poor and has to do whatever it takes to survive, but he has a good heart and deserves more than he has.  Despite what he lacks in material possessions, The Little Tramp more than makes up for in kindness.

Finally, another reason why I enjoyed this film were the clever tactics that Chaplin used to convey plot points in his films without using sound.  For example, in the beginning of the film where The Little Tramp meets the Flower Girl for the first time, there are a few tricks that Chaplin employs to set up the characters.  The Little Tramp, traveling with the Millionaire, spies the Flower Girl selling flowers.  He asks the Millionaire for money to purchase all of the girl’s flowers.  The Little Tramp borrows the Millionaire’s Rolls Royce and returns to the Flower Girl’s vending spot.  She hears the car drive up and then The Little Tramp purchases all of her flowers.  Then, she drops one of flowers and doesn’t notice–this is when The Little Tramp realizes she is blind.  As she’s making his change, a man gets into a nearby car.  She hears the door slam and the car leave, and assumes that her wealthy customer has left.  This simple scene sets up the premise: The Little Tramp falls in love with a blind Flower Girl who mistakenly believes that he is wealthy.  Throughout the film, she believes that she has a wealthy suitor who is giving her money to save her home and saving her from eviction.  Little does she know that her admirer is homeless, destitute and disheveled–all she knows is that he is sweet, caring and really seems to like her.  This premise when combined with the wonderful ending, is what makes this film stand out from others.  It would be easy to make the ending corny and saccharine, but through Chaplin’s genius, he’s able to deliver the perfect ending.

My name is Kayla. I'm a crusty but benign soul who loves classic movies and television. My favorite actor is Errol Flynn and my favorite actress is Lucille Ball. My favorite film is "The Long, Long Trailer" (1954). "I Love Lucy" (1951) is my #1 favorite television show of all time.